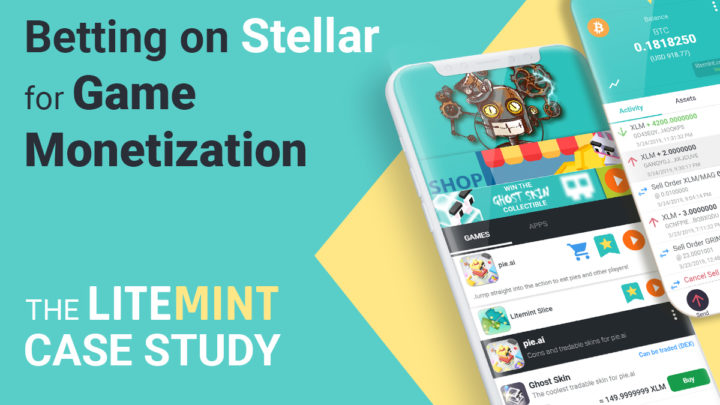 With 17,000 mobile installs and 3 pilot games fostering its initial community and showcasing its features, Litemint, a non-custodial, open-source Stellar Wallet, is getting ready to launch its app and game platform powered by decentralized payments and collectible trades.

In this case study, I explain how Litemint leveraged the Stellar Network to jump-start a full-featured, decentralized game monetization platform.

To start with a bit of background, back in 2016, I was meeting a game publisher partner at the San Francisco Casual Connect conference and we got into a long discussion on the idea of monetizing games with crypto.

In the industry, game developers often look to get a share deal with publishers (along with mainstream distribution platforms like Steam, Facebook…). However, these distribution partners are also acting as payment hubs and furthermore, with the need to engage in content syndication (sub-licensing), they may require some grants of intellectual property rights.

Crypto sounded like an opportunity to break away from that monolithic and centralized payment hub model. It became clear that publishing platforms should not be part of the payment equation—and crypto is a perfect technology to achieve that.

Having previous experience with self-publishing games and directly collecting in-app payments to alleviate the drawbacks mentioned above, I knew this was a time-consuming and intricate experience. Reaching out to the audience is one thing, retaining it is another—a non-trivial task outside of non-mainstream channels.

The sweet myth that a simple buy button on a page would alone be enough to start collecting payments is quickly replaced by another, less attractive, reality.

Even top grossing games like Candy Crush from King only met their full potential after publication on mainstream distribution platforms despite King already being an online publisher with a game portal.

Solution Litemint should address this issue by providing a dedicated publishing platform with retention mechanisms (daily challenges and other social features) while remaining true to the crypto paradigm—combining the best of both worlds.

The Need for Trust

Several years ago, I had the opportunity to partner with Draugiem.lv (the Facebook of Latvia) on a publishing deal. Impressively, despite publishing web games, in-app purchases were the strongest stream from our shared revenue, and by far. Usually advertising revenues come on top for web games. They could achieve such results because 1) Draugiem is a trusted local service and 2) Their users were charged, not online but on their phone bills—keeping an open tab requires trust

Similarly, it is not surprising to see that Kakao Corp content platform is outperforming their advertising revenues. KakaoTalk is the most trusted and dominating social platform on the Korean local market.

Although seamless billing with the local service combo is an impractical solution for most content creator, it shows that when trust is not an issue, online micro-transactions can be used very successfully to monetize content.

Solution By providing users with a non-custodial and open source wallet, promoting self-ownership of funds, combined with strong content curation to favor mainstream adoption, we can emulate this open tab environment that users can feel at home with.

From a quick overview, it was apparent that scalability and speed were strong features of the Stellar network. After heading to the Stellar laboratory website and building a few transactions to emulate some key scenarios, it became even more evident that Litemint had found its home.

Not only the Stellar network is fast and currency-agnostic, it also provides a scalable multi-tiered structure which allows for light, cross-platform clients. And its most impressive features, the fast asset issuing process and native decentralized exchange, open up limitless possibilities for content creators.

Issuing assets on the Stellar network is as simple as making a payment transaction and is a great way to implement collectible items for games, discount coupons for apps or anything else. Stellar-based applications can also benefit from path payments to route orders through a series of assets providing innate cross-currency capabilities to all payments on the network.

It would take a few more months to free myself from other activities and focus on the development of Litemint but I could finally commit full-time from July 2018.

After 6 months of development, Litemint was launched officially on Dec 25, 2018 with a Google Play release and has since been released on the App Store, Windows, Linux, Mac, and Web.

The Results (so Far)

With 3 pilot games and 2 apps published to foster the initial community and showcase the platform features, Litemint has now hit past 17,000 mobile installs and is getting ready to open its app platform to third-party developers in Q4 2019.

The development of the eponymous game LITEMINT.IO has started for a release Q4 2019!

Several game studios have already manifested their interest in joining for the launch. If you have a business that provides safe-for-work* apps, games and content, feel free to get in touch.

Thanks for reading and keep posted.